Investment markets performed particularly strongly during the last quarter of what was an extraordinary year, with all major equity indices ending the period in positive territory. November was the key month, with the US election defeat of President Trump raising hopes that global trade tensions would diminish being followed days later by news that a vaccine had proved 90 per cent effective in protecting against Covid-19. These two factors led to a record 12.6 per cent monthly gain in the MSCI World Index.

Sentiment in the UK and the EU also improved with the signing of a Brexit deal on Christmas Eve, and whilst the immediate relief rally in UK equities, Gilts and Sterling was understandable, the agreement, at least at this stage, is light on detail. This is especially true in relation to the Services sector, which was excluded from the talks, and this could have adverse effects for the UK, and to a lesser extent the EU, over the medium and longer term, and could impact growth in 2021.

The year also ended on another positive note, with President Trump finally, and somewhat grudgingly, signing a major legislative package which included COVID relief payments, and detailed plans for US government spending for the next fiscal year.

2020 will obviously prove to be particularly memorable. It would have been hard to imagine in the depths of the initial panic in March that most major equity markets would end the year firmly in positive territory. The Covid-19 pandemic resulted in the deepest recession in modern history, but it also proved thankfully to be one of the shortest. The unprecedented global fiscal and monetary stimulus that was quickly provided rapidly changed sentiment, allowing markets to recover sharply. In the US for example, the rally from the March 2020 low is now larger than those of 1929 or 1974. 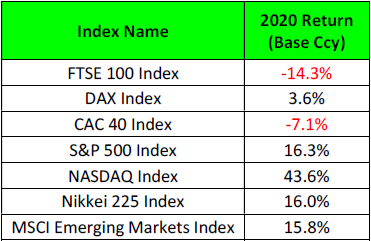 The FTSE 100 Index was sadly a notable exception to this overall trend, and despite a 10.13 percent rally in the fourth quarter, still finished 2020 down 14.34 percent, the worst year for the index since 2007. There was a particularly wide dispersion in global equity market returns, largely driven by the sectoral structure of index constituents. In addition to Brexit uncertainty, the FTSE was dragged Nigel Cuming Chief Investment Officer down by its large exposure to financial and energy stocks, whilst better performing markets such as the US and China have a much greater preponderance of technology issues, the obvious beneficiary of the personal, workplace and societal changes brought by the pandemic. This dispersion of returns was ably demonstrated by the Tech-dominated NASDAQ index in the US, which rose by 43.6% over the period. 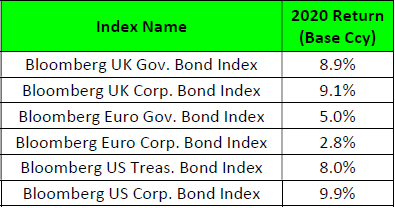 The value of the Bloomberg Global Negative Yielding Debt index rose to USD$ 18.04 Trillion at the end of December, its highest ever level, and it is estimated that approximately 27% of Global Investment Grade debt now trades with a negative yield.

Commodities performed exceptionally well over the year. Gold and silver rose by 25% and 26% respectively, fuelled by global economic uncertainty and US Dollar weakness. Industrial metals such as Copper and Lithium did even better, rising in the expectation of an eventual global manufacturing recovery.

We are surprised at the bullish levels of expectation for the year ahead. There appears to be a consensus view that after a difficult first quarter, the impact of vaccinations will lead to a very strong recovery in the global economy, and rapid improvement in the outlook for corporate earnings. Whilst we are broadly in agreement with this general economic outlook, we feel that valuations across most asset classes presently look stretched by normal methodologies. Whilst the combination of zero nominal (or negative real) interest rates, an overhang of excess liquidity and significant further fiscal and monetary stimulus will eventually fuel a synchronised global recovery of some size and duration, there are some hurdles to be overcome.

The timing and pace of recovery will be totally dependent on coronavirus developments. A great deal of hope has been placed on the effectiveness and speed of delivery of the vaccines. As the virus is now mutating, there is possibility that the present vaccines could become ineffective which would obviously be disastrous. As this cannot be ruled out, whilst we maintain our long-term bullishness, we believe that most markets are overbought at present and given that there is a degree of complacency, they are vulnerable to a risk-off period in Q1.

Technology stocks were a main driver of portfolio performance in 2020, with the “FAANG” stocks up approximately 100 per cent. A key question that we are asking ourselves for 2021 is whether this level of out-performance is sustainable. Given the expectations for a strong global recovery at in the 2nd half of 2021, a case could be made that after a long period of underperformance, value stocks are now more attractive and are due a re-rating. Whilst it is too early to call an end to the growth bull market, some rotation into value stocks is likely in 2021. We are aware of the possible regulatory risks to the huge, market dominant technology companies, and the view that they have become too dominant, and need breaking up, is likely to gather momentum under a Democrat President. We continue to believe that there are still exceptional opportunities at an individual stock level, despite the rises of last year, and must not lose sight of the fact that the pandemic has accelerated another industrial revolution, driven by digitisation, artificial intelligence, biotechnology and robotics. This is not going to go away and is only just beginning.

The world is in transition. Somewhat ironically, the Chinese economy is growing rapidly as the country enjoyed a V shaped recovery due to its ability to enforce an effective lockdown, and this is fuelling a strong performance in many Asian countries. Many forecasters expect the Chinese economy to become larger than the US’s within fifteen years. It is likely that we will be increasing exposure to companies in the region that meet our thematic criteria over the course of 2021. Other areas of potential interest to us are selected emerging markets, including Latin America. We believe that the US will look to develop their external capital formations in the more developed Latin American countries as they aim to ‘re-shore’ economic activity away from China.

The biggest threat we face in forthcoming years is inflation. Whilst this might not become apparent in the early part of the 2021, there are already some inflationary pressures, as can be seen by rising commodity prices. With the Democrat’s victory in Georgia effectively giving them control of the Senate, they are now likely to embark upon more expansionary policies than would have been the case if they had lost and we believe that the eventual economic recovery could be accompanied by an acceleration in inflation. When demand finally picks up, fuelled by loose fiscal policy, it may become apparent how much permanent damage has been done to the supply side of the global economy.

In addition to this, we remain concerned at the high level of debt that countries have been forced to take on to fight the pandemic. This is not sustainable, and the most politically palatable solution, rather than cutting spending, will be to allow inflation to rise to deflate away the future value of the debt. This would create the unique situation of governments keeping interest rates at present historically low levels despite rising inflation, fearing as they would too dramatic a spike in yields, which would in turn make the cost of rolling over the massive debt levels unaffordable. Quite a quandary. As a gauge of how countries view the methods for ‘paying for the pandemic’, it will be interesting to see proposals in the UK budget in March when changes to Capital Gains Tax and possibly Inheritance Tax are likely to be made.

In conclusion, we believe that despite some short-term vaccine-related cautiousness, there are still fantastic individual equity and thematic opportunities in the global markets. An inflationary environment is generally equity market friendly, and we are confident that 2021 will be another positive year for investors.