The Storm Before the Calm

“The Storm Before the Calm” is a most worthwhile read. I have long been a subscriber and avid reader of Freidman’s thoughts on global politics, economics, societal and cultural issues, together with his analysis of history.

I recently asked my young friend Cory Mears to read “The Calm...” I wanted a young person’s reaction versus my 60-year old’s biases. Below is Cory’s summary.

Precis: George Friedman’s book, The Storm Before the Calm, suggests that the series of deep structural changes currently taking place in America are the product of entrenched, internal forces rather than recent presidential trends. Friedman outlines that two major cycles, consistent throughout American history explain the present turbulent situation. Each period begins with a problem generated by the previous cycle and creates a new model for American prosperity. As each problem is solved, the American nation can enjoy a period of prosperity, which in turn produces a new federal or economic problem that has to be solved. The invention of the American nation (its regime, its land, its people) lies at the heart of Friedman’s argument. He states that something within the American soul is constantly trying to create something new. This idea provides a compelling argument for how new institutional and socio-economic models emerge and solve the problems of the existing system.

The first major cycle, which occurs approximately every eighty years, is ‘institutional’. This determines the relationship between the federal government and the rest of American society. Friedman asserts that war has traditionally caused the distinct shifts in cycles (the Revolutionary War, the Civil War and World War Two). He explains that the severe stresses of war reveal the inherent weakness of the existing institutional structure and demand a new institutional system. According to Friedman’s cyclical model, he predicts that an institutional shift is due to take place in 2025. The emergence of the United States as the sole global power following the collapse of the Soviet Union has left it unable to deal with the ensuing conflicts and uncertainty.

The second major cycle, which is ‘socio-economic’, occurs approximately every fifty years. It modifies the dynamic between American society and its economy. In each socio-economic cycle, American society and the economy experience an all-encompassing crisis, which creates the impression that both will simultaneously implode. Policies which had worked within the fifty-year cycle begin to cause significant harm and create a political and cultural divide. A new political culture emerges and adopts a radically new approach to solve the underlying economic issue, which usurps the existing political elite. Friedman views the resulting political instability as the visible layer around deep social and economic dislocation. It is the system rather than politics which drives this transition, not vice versa. He prefers to view Presidents as ‘street signs’ who do not create the new cycle, but instead permit it to take place. America is now experiencing the opening act of the current cycle’s socio-economic crisis.

Friedman highlights that in the late 2020s for the first time in the 250-year history of the American nation, both the institutional and socio-economic cycles will converge. He predicts a period of intense chaos, yet remains optimistic that America’s resilience can consistently overcome the challenges of both cycles. The 2030s will be a period of creation and out of the endemic failure of the 2020s will appear both a new socioeconomic and a new institutional system.

The importance of technology runs throughout Friedman’s book. In particular, how it intersects with the special role of the business person and the inventor in the American society and character. Friedman outlines the different phases of core technologies. He argues that we are in the final phase of the ‘microchip era’. The microchip has undoubtedly transformed the American society and driven the inventiveness of the past half century, but it now ceases to be dynamic. This seemingly contradicts the views of business leaders who believe we are still to experience the real gains from digital technology. Many argue that there are significant opportunities from digital technology which have not yet been realised, and which could help raise languishing levels of productivity. However, it is important to acknowledge that Friedman does not doubt that there are still benefits to be accrued from the microchip, just as the automobile continues to remain critical to society. Instead, he outlines that the microchip is no longer the radically new technology which can drive exponential economic growth. The enormous burst in productivity which took place in the 1990s as a result of the microchip has passed, and growth in individual productivity levels has slumped since the late 2000s. It will take a new transformative technology to rectify this economic malaise.

Cory’s thoughts: Friedman published The Storm Before the Calm in January 2020, before the emergence of the coronavirus pandemic. Some will undoubtedly question whether this will affect the prophecies of his cyclical model. However, I believe that the application of Friedman’s theory to the current pandemic, strengthens its validity. Evaluation of how a government responds to a disaster tells us more about the government than the disaster itself. Much like the stresses of war, the coronavirus pandemic is revealing the existing weaknesses of the institutional system.

The current American socio-economic cycle solved the problem of capital shortage caused by the previous cycle, through an amendment of the tax structure. Reduced taxation of the investor classes led to an investment boom in which the suppression of interest rates drove the price of money down. America’s move away from industrialism has led to both unemployment and under-employment of industrial workers. This, coupled with the damage done to prudent savers by low interest rates, has begun to generate an economic crisis. This will inevitably evolve into a social crisis.

The response of the current American system to the pandemic will maintain persistently low interest rates. It will only serve to exacerbate the emerging grievances of the American lower middle class and dislocated industrial workers. This will fuel the social and economic dysfunction experienced at the end of every cycle. It will lead to the disillusionment towards the present political elite and thus vindicate Friedman’s theory, that a new political culture will emerge. Viewed in this context, the pandemic should not disrupt the cyclical kilter of the American nation, but instead form part of the process which has caused it to consistently strengthen and evolve.

Friedman’s views on the American university system are particularly interesting, notably the issue of elitism. He argues that the current selection process at the best schools is flawed. It is designed not to find the best minds, but rather to find minds already shaped to the culture and ideology, which the universities believe can benefit from their education. Friedman argues that excellent facilities and college campuses, particularly at elite universities, are one of the main reasons why a college education is so expensive. Yet I think that he is looking at this issue from the wrong perspective. The state-of-the-art campuses are a product of the exorbitant cost of higher education, rather than a cause of it. A degree from a good university has largely been commodified. It has become difficult to differentiate between universities solely from the contents of one’s chosen course. In the saturated climate of higher education institutions, universities increasingly depend on these marginal bonuses to attract a prospective student. I agree with Friedman’s view that universities will become the battleground of the crisis of the 2020s, which will force a seismic change in higher education. However, in his forecast, he does not consider that this institutional and socio-economic evolution could lead to the ultimate rejection of the university system. This will require a viable alternative, such as the well-established apprenticeship scheme in Germany.

The most obvious criticism of Friedman’s book would be that he has cherry-picked events in American history to work within the confines of his cyclical model. However, I believe this criticism would be unfounded. Throughout The Storm Before the Calm, Friedman convincingly argues and gives evidence of his theory of evolutionary cycles. Some may find it disconcerting how he downplays the role of individuals in American history, as it counters the belief in the American dream that citizens can control their own destiny. It is easier to understand history by analysing individual leaders and events, rather than considering intangible systems which work beneath the surface to drive a nation.

For those wishing to follow up, please see the link below to an interview with George. Well worth a listen. 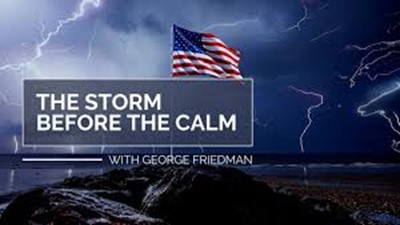