Jonathan Sacks, the former chief rabbi, was buried in a small ceremony on Sunday, less than 24 hours after his death was announced, in keeping with Jewish custom. 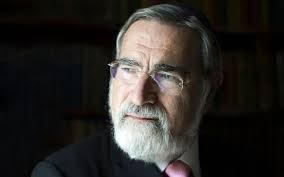 Sacks, who was 72, was the Orthodox chief rabbi for 22 years until 2013, and was made a life peer in 2009. As a regular listener to his Thought for the Day broadcasts on BBC Radio 4’s Today programme I shall greatly miss his wisdom, tolerance and depth of intellect. He could pack his thoughts on complex issues into a few minutes. You always finished listening to his calm assured voice with a greater understanding and normally with more sympathy. Rabbi Sacks was the sort of thought leader very much needed in our ever changing and challenged world. We need people like him. He was a social philosopher, and strong proponent of interfaith discourse and understanding. He was a wonderful communicator. He understood our world. For those not familiar with the writings of Rabbi Sacks, I would highly recommend his influential book, "The Dignity of Difference". Sacks was a man of great dignity. "No one creed has a monopoly on spiritual truth" May his memory be a blessing. Zikhrono livrakha.