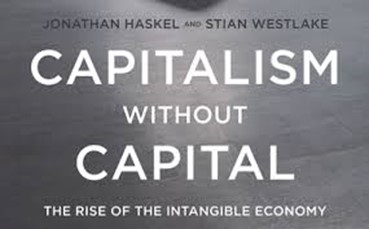 “Capitalism without Capital” is a book that has deeply influenced my thinking. The book sums up the quiet revolution that has been taking place since the turn of the century, namely the rise in investment in intangible assets like design, branding and software. Success today, whether as a pharmaceutical company or a gym, hinges on the value of intangible assets held.

Investment builds capital and the advent of the internet and the “knowledge economy” has changed global economics. The way we invest needs to reflect this.

So important is this change that we at TEAM have “Capitalism without Capital” as one of our 12 Rules.

I asked my friend Cory Mears to read the book and give me his thoughts.

How can a company list for $3.5bn on Nasdaq when its most valuable asset is a network of committed suppliers? In Capitalism Without Capital, Jonathan Haskel and Stian Westlake explain the success of sharing-economy businesses such as Airbnb, and the rise of the intangible economy.

The book focuses on the change in recent years in the type of investment seen across most advanced economies. In the US and UK, investment in intangible assets such as software, R&D, training and branding now exceeds investment in tangible assets such as buildings and machinery. The idea that the capital stock of the economy changes continuously is hardly ground-breaking. However, the insistence of the authors that there is something fundamentally different about intangible investment is an intriguing concept.

Haskel and Westlake suggest that this change from tangibles to intangibles is still hard to monitor. Company balance sheets and national accounts fail to capture the extent of intangible investment. The authors refer to Baruch Lev and Feng Gu’s, The End of Accounting, which suggests that intangibles are hidden in company accounts. Accountants and statisticians tend not to include intangible assets as an investment, but rather as day-to-day expenses. This understates the assets which are powering modern-day companies. Yet, Haskel and Westlake do not perceive mismeasurement as the greatest consequence of the rise of intangibles. Their central argument suggests that the basic economic properties of intangibles make an intangible-rich economy behave differently.

The authors explain these features of intangibles assets with reference to the four S’s: scalability, sunkenness, spillovers and synergies. These features challenge the traditional market economy and help us to understand some of the issues facing economies today.

Scalability means an intangible asset can often be replicated and shared in multiple places at the same time, with little or no reinvestment. The economic concept of ‘non-rivalry’ is not new, but the authors argue that this characteristic creates the opportunity for rapid commercial expansion in the intangible economy. As an example, Airbnb’s intangible investment in the organisational development of its network of hosts drives the global growth of the platform. Through the internet and smartphones, Airbnb has exported its code to expand its network, cheaply and efficiently. Scalability enables Airbnb to grow in a way that a hotel chain could not, without investing in physical assets. Scalability helps to explain Airbnb’s $3.5bn listing on Nasdaq.

The sunkenness characteristic dictates that once a firm makes an intangible investment, it is often hard to sell or recover its value. It is easier to value physical assets such as buildings or land, than a lean production system. The authors envisage that an intangible-intensive economy will lead to greater uncertainty of investment. It poses problems for creditors in a financial system dominated by debt provision.

Haskel and Westlake reiterate the importance of spillovers in the intangible economy. It is relatively easy for competing businesses to take advantage of intangible investments, which they don’t make themselves. Firms which make an intangible investment will not receive all, or perhaps any, of the returns. Surprisingly, this is not a recent phenomenon and can even be explained with reference to the Beatles.

In the 1960s, their record label, Parlophone, was a subsidiary of EMI. The profitability of Beatlemania led EMI to invest in medical equipment research, which enabled the invention and manufacture of the first CT scanner. EMI took out patents on the underlying technologies and invested heavily in an infrastructure to target the American market. Yet by the 1970s, General Electric (GE) and Siemens began to dominate the CT scanner market with technologies licensed from EMI.

Spillovers enabled GE and Siemens to exploit EMI’s intangible investments, at a relatively low cost. Businesses which can best capitalise on their own investments in intangibles, or who can exploit the spillovers of others will thrive in this changing economic landscape. Greater clarity of IP rights will prove integral to combat the disincentive to invest, which spillovers create.

Intangible assets demonstrate synergies and often increase their value when combined with other intangibles and human capital. However, the existence of synergies between ideas creates a tension with spillovers. If economies choose to prevent spillovers through the rigorous enforcement of IP laws, they will also reduce the potential for synergies. However, in an intangible economy where ideas are more valuable when combined with other ideas, there is a strong incentive to obtain access to as many ideas as possible. Haskel and Westlake suggest that the enhancement of synergies in the intangible economy will lead to ‘the increasing prominence of open innovation’.

The authors state that the rise of the intangible economy helps to explain the secular stagnation experienced in advanced economies in recent years. Failure to record intangible investment has caused GDP growth statistics to be understated. It is the scalability of intangibles which has allowed large and profitable firms to emerge. The propensity of these firms to exploit spillovers has increased the productivity and profits gap between the leaders and the laggards. The success of the top firms further decreases the incentives for firms at the bottom to invest, for fear of exploitation.

In recent times, the success of Coronavirus UY, the track and trace app developed in Uruguay, presents a valuable case for open innovation. 150 people from 12 private companies collaborated to achieve a socially beneficial product. Uruguay’s strong digital infrastructure has been credited as a key component to the success of the app. The authors of this book, published pre Covid-19, consider that digital infrastructure is vital for a prosperous intangible economy. The future challenge will be whether similar open innovation can flourish where there is less of a social incentive. If the benefits of synergies are to be realised, the idea that open innovation is a cheaper way to exploit rival knowledge will need to be quashed.

Capitalism Without Capital poses the question of what the rise of the intangible economy might mean for public policy. Companies are proficient in moving mobile capital back and forth between countries, which makes intangible assets more borderless. In the context of an intangible intensive economy, governments will have to compete on R&D reliefs or establish a preferential infrastructure to attract R&D within their own country.

For optimal economic performance in an intangible economy, there needs to be greater public investment in R&D. Good governance allows innovation to flourish. The UK government's current Industrial Strategy which includes a target to "raise investment on R&D to 2.4% of GDP by 2027” appears insufficient. The Industrial Strategy should incorporate a greater diversity of funding streams, concentrated in breakthrough funding agencies, which mirror The Defense Advanced Research Projects Agency (DARPA) model. To maximise intangible investment, the aims of these funds should be more specific than those of the UKRI’s Industrial Challenge Strategy Fund, which aims to solve an ‘ageing society’ and ‘clean growth’.

Brave politicians are needed to eschew the risk-averse nature of politics, to ensure the success of an intangible-intensive economy in the UK. The main obstacle to public intangible investment will be whether it is politically sustainable. Consecutive governments will need to be committed to creating a climate which is conducive to the sustained rise of intangibles rather than providing a quick fix.

What could the rise of the intangible economy mean for the future workforce? Many commentators suggest that Gen Z will have significantly more job changes than previous generations. The rise of portfolio careers will amplify spillovers and lead to the cross pollination of ideas across sectors. As knowledge is non-rival, intangible investments such as management techniques and business processes should diffuse more freely across the economy. The intangible economy will place emphasis on firms attracting and securing the best talent.

The laggards will underinvest in the intangible development of their employees, for fear that the company will not accrue the benefits. The leaders, by comparison, will continue to invest in training and create synergistic clusters within the company. This will establish an environment where employees are more willing to share ideas, stay loyal and retain the firm’s intangible capital.

Management of intangible-intensive firms will demand additional coordination and effective leadership to retain talent. Haskel and Westlake discuss the value of voluntary followers in an intangible economy. Psychometric testing is likely to increase in the selection processes. For candidates it may seem an arbitrary way to cull applicants, but for firms it will prove invaluable. It will enable them to select employees who will cooperate with each other and possess the attributes to thrive in an intangible intensive economy.