A couple of (hopefully) interesting titbits from the markets this week:

A tweet handle, and subsequent Bloomberg news headline, that flashed across our terminals on 7 September. The source was revealed to be the President of El Salvador, Nayib Bukele, declaring his country’s response to Bitcoin’s 18%+ drop within an hour of the crypto currency being declared legal means of exchange in the country, placing it on par with global reserve currency the US dollar: 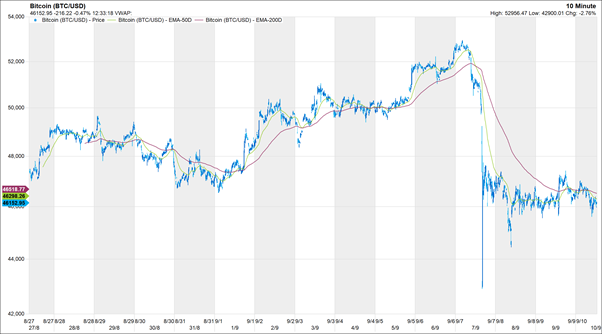 El Salvador is officially the first sovereign nation to declare Bitcoin as legal tender. Whilst the hype and expectation in terms of further Bitcoins gains ramped up into the event, for market watchers the sharp price reversal should not have come as a surprise. Indeed, we have seen this movie before several times: the launch of bitcoin futures, the Coinbase IPO, and now the first nationwide adoption.

Could this have been a straightforward case of "buy the rumour, sell the fact"? This is the old trading adage which asserts that asset prices rise in expectation of positive events, then drop subsequently as the good news is already reflected in prices, and the baton is passed from expectation to reality. History has certainly shown that the bigger the hype, the bigger the run-up into the event date and the sharper the subsequent correction. It is plausible.

Bulls will point to 7 September 2021 as a seminal event in which the widespread adoption case for crypto currencies has been further cemented. Bears may well counter that, with a fixed supply, Bitcoin’s value is entirely dependent on what the next person will pay for it and how many individuals it can be sold to. If this is the case, events like El Salvador’s adoption naturally create selling pressure as large, one-time adoption events remove future marginal buyers.

At TEAM, we are neither crypto currency evangelists nor doomsayers. Our work suggests that there is a meaningful role for crypto currency to play within our real asset stable alongside others including gold, commodities, infrastructure, real estate and volatility. The caveat is that we are dynamic in our allocation, which gives us the flexibility to move efficiently to capture opportunities or to mitigate potential adverse moves.

Turning to Japan, the recent decision of Prime Minister Yoshihide Suga, Abe’s successor, to step down ahead of the LDP leadership election later this month appears to have triggered a long overdue rally. The mainline Topix Index has risen by 5.4% since that announcement on 3 September to close this week at its highest level since August 1990: 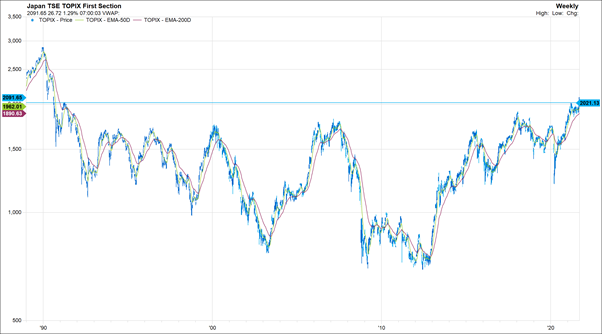 As we highlighted in our previous quarterly commentary, Japanese equities have not performed well either on an absolute or relative basis of late. MSCI Japan declined by 0.2% in US dollar terms on a total-return basis in the second quarter of 2021, compared with a 8.9% gain in MSCI USA and a 7.7% gain in MSCI Europe.

The main protagonist for this outcome was an unfeasibly slow vaccine rollout. Just weeks before the lighting of the Tokyo Olympics ceremonial torch, Japan’s fully vaccinated rate was running at an alarming 8% of the population. This problem has now been addressed, with the percentage of the Japanese population now double-jabbed standing at 49%, compared with 53% and 64% in American and Britain, while the pace of vaccinations continues to remain solid. At the current pace of vaccinations, 80% of the Japanese population will be fully vaccinated by the end of this year.

Underpinned by the above, and with improving return on equity ratios and abundant cash on the balance sheets of many Japanese corporates (in addition to a potentially positive political appointment), we would not be disappointed to see our TEAM multi-asset models begin to allocate more meaningfully to Japanese equities within our equity risk bucket. Indeed, this has already started to happen in recent weeks.