The Outlook for Gold Remains Undimmed

At TEAM Asset Management we like to keep our investment ideas simple, which means we like to invest with the wind on our backs, and with a long runway ahead of us. We are not short-term traders.

Gold as an investment is the financial market equivalent of Marmite, prone to evoking an emotional reaction from participants who typically fall into one of two distinct camps. Either, a) gold is the only ‘real’ money, having outlasted every paper currency ever created and survived for thousands of years, and whose intrinsic value is determined by the market, not governments, or b) gold is a relic of the past, impossible to value, and, furthermore, pays no income.

We sit firmly in the former camp, having accumulated a significant exposure to gold and precious metals in the first half of this year. If we had been asked twelve months ago for the catalyst(s) that would propel gold to sustained, meaningful outperformance relative to all other asset classes over the coming twelve months and beyond, admittedly we would have struggled. That all changed in a very short period during March this year that included US Fed Chairman Powell’s ‘Mario Moment’.

In our view, the convergence of multiple factors make gold (and, by extension, silver, and the precious metals sector) an essential component of an appropriately diversified portfolio.

Our list of reasons include performance relative to paper currencies, extraordinary levels of global monetary and fiscal stimulus (accompanied by a parabolic rate of balance sheet expansion), negative real interest rates, and the prospects for an accelerated pick-up (or worse) in inflation. In a related context, for those holding fixed income assets yielding 1% or less, there exists an intrinsic need for an effective hedge should our inflation genie escape the bottle.

Love it or loathe it, the price move in gold has captured the attention of investors in 2020, having recently eclipsed the previous all-time intraday US dollar high set at $1923.70 per oz (in August 2011). Gold’s strength can be evidenced by looking at the ten year returns of the yellow metal relative to the price of various fiat currencies, so-called because paper money is, in principal, devoid of intrinsic value, and backed by a government that has the ability to print unlimited quantities of banknotes: 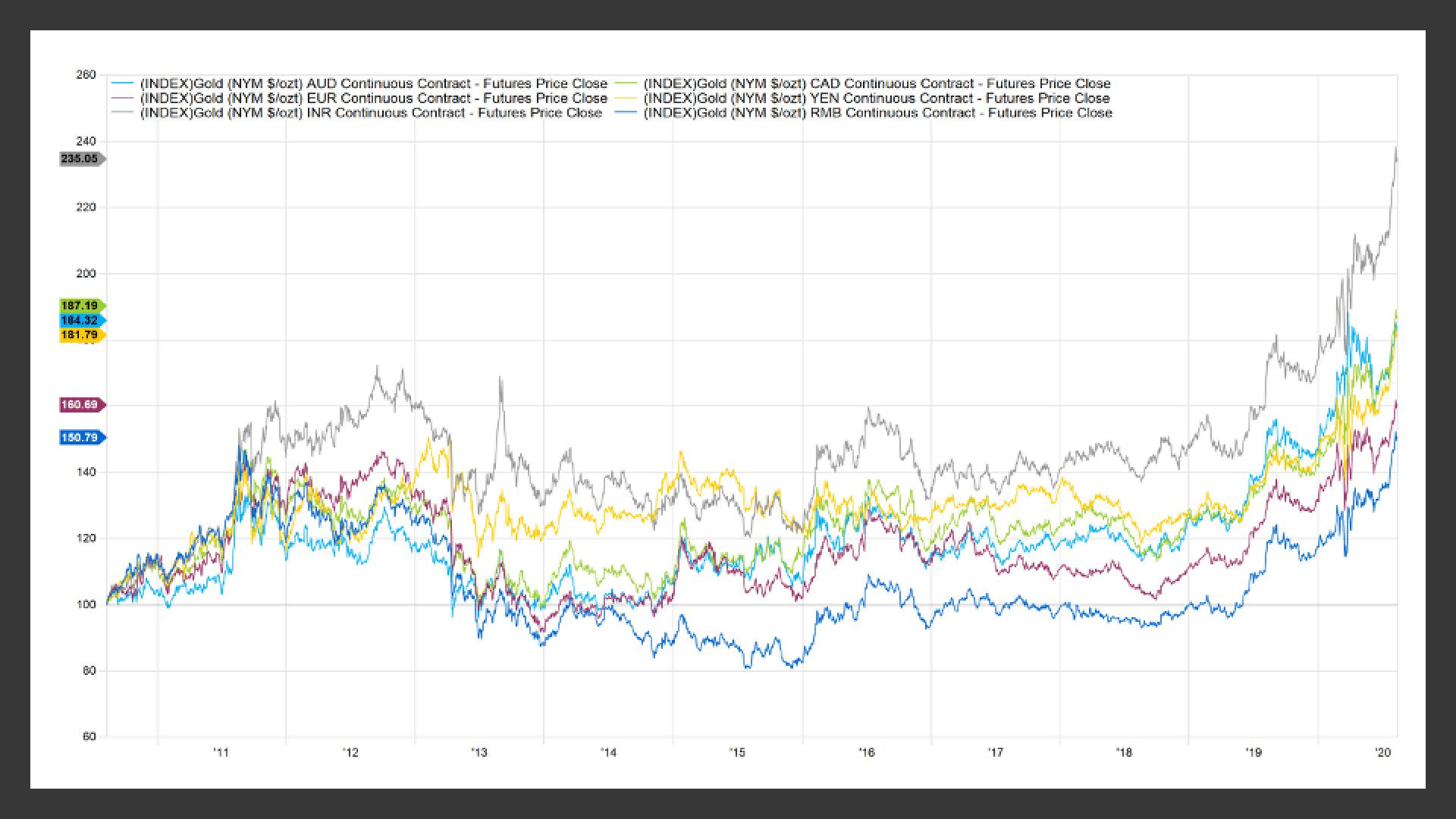 What is interesting is that prices have set discrete nominal records against essentially all of the currencies that are relevant to the yellow metal (above is gold priced in Australian dollars, Canadian dollars, Chinese yuan, Euro’s, Indian rupees and Japanese yen). Whilst much of the concentration of news flow on the subject has centred on the continued weakness of the US dollar, the price action would suggest this is not just an American story.

‘The term ‘unprecedented’ has become an oft-used word in the financial lexicon of late, but its utility is valid in the context of the extraordinary monetary and fiscal stimulus efforts deployed by government’s globally in 2020. According to the latest IMF report, the total level of global fiscal support currently stands at an estimated $15 trillion (yes, trillion), split equally between direct budget support, and additional public sector loans and equity injections, guarantees, and other quasi-fiscal operations.

So far, the Group of Ten (G10) advanced and emerging market economies, including China, account for the bulk of global fiscal support. Taboo policies including cash handouts and the direct purchase of bonds, including those rated junk, have propelled total commitments far beyond those delivered during the global financial crisis. Whilst the measures have different budgetary and debt-related implications, a common characteristic is the immediate, dramatic increase in the supply of money Here is the year-on-year percentage change in US M1 and M2 over the past 10 years: 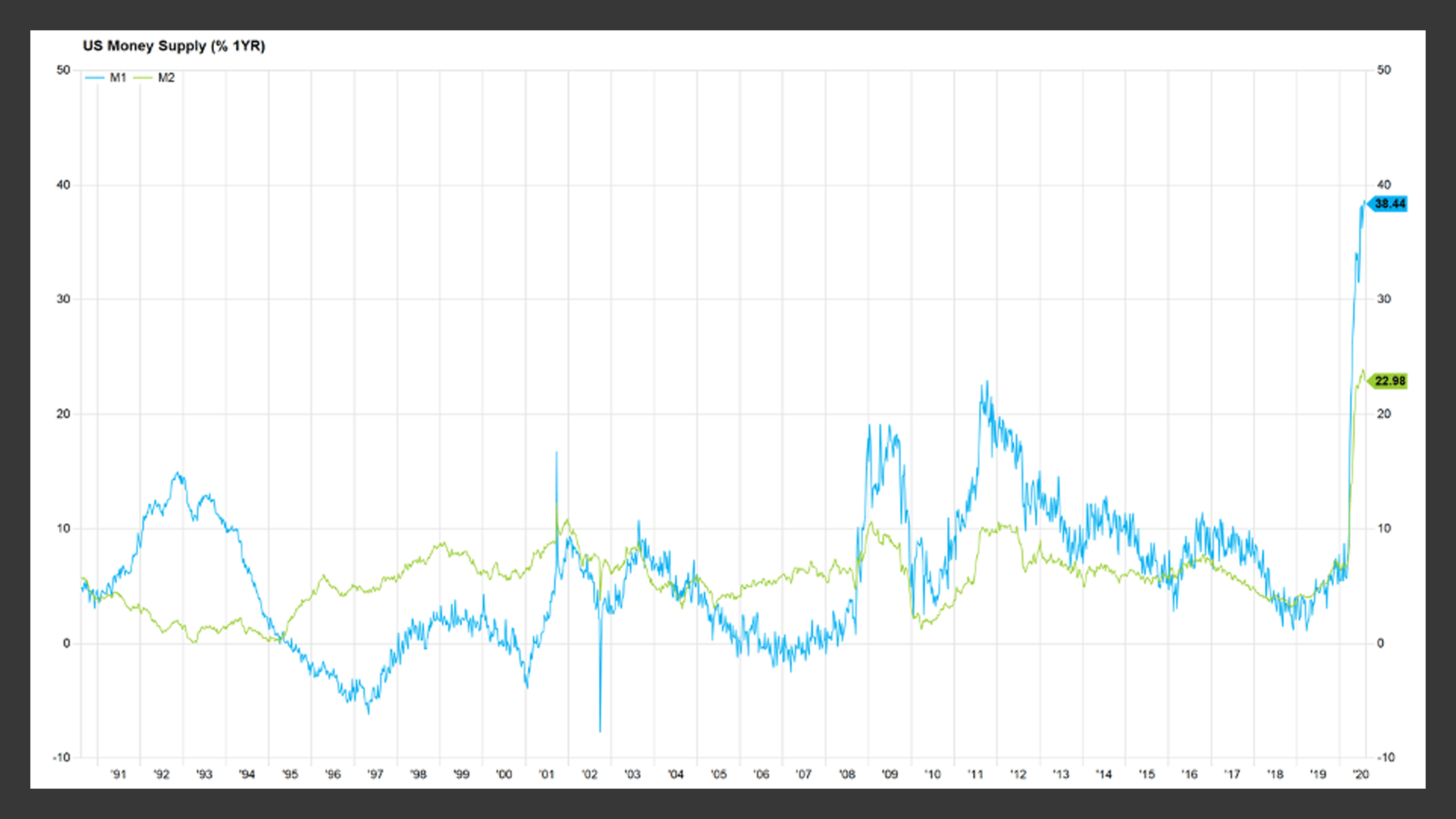 Arguably the most important influence on the price of gold is the real yield available on bonds. Gold does not pay an income equivalent, therefore becomes less attractive when real yields offered by bonds are high, and vice versa. Currently, real 10-year yields in the United States are more negative than they have been since inflation-linked bonds became a freely tradeable and liquid instrument: 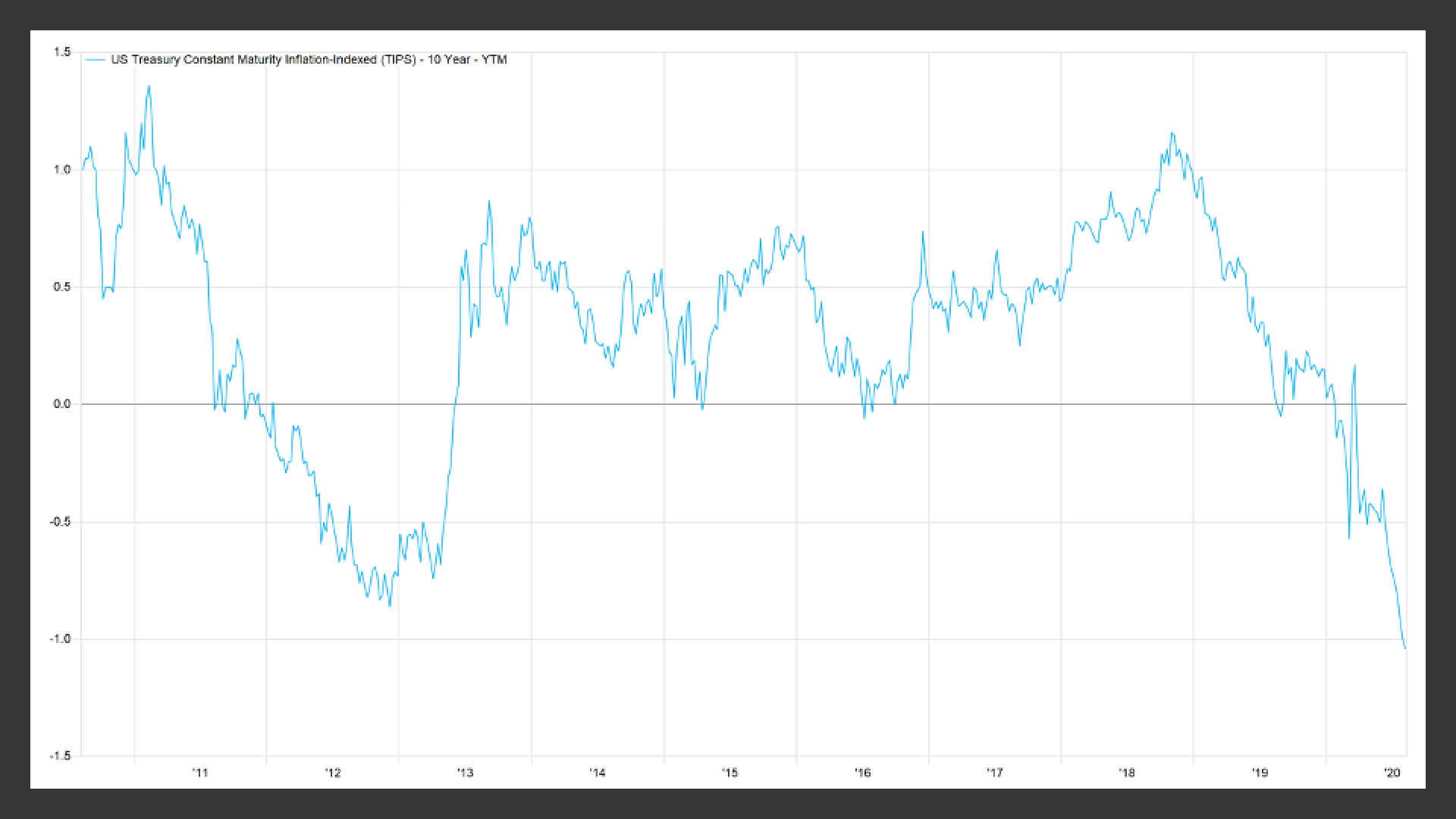 Next, we turn to the issue of inflation. Investors in gold view the metal as a store of value. As expectations for an increase in inflation materialise, the value of gold naturally rises. Shown below is the chart of US 10-year inflation expectations: 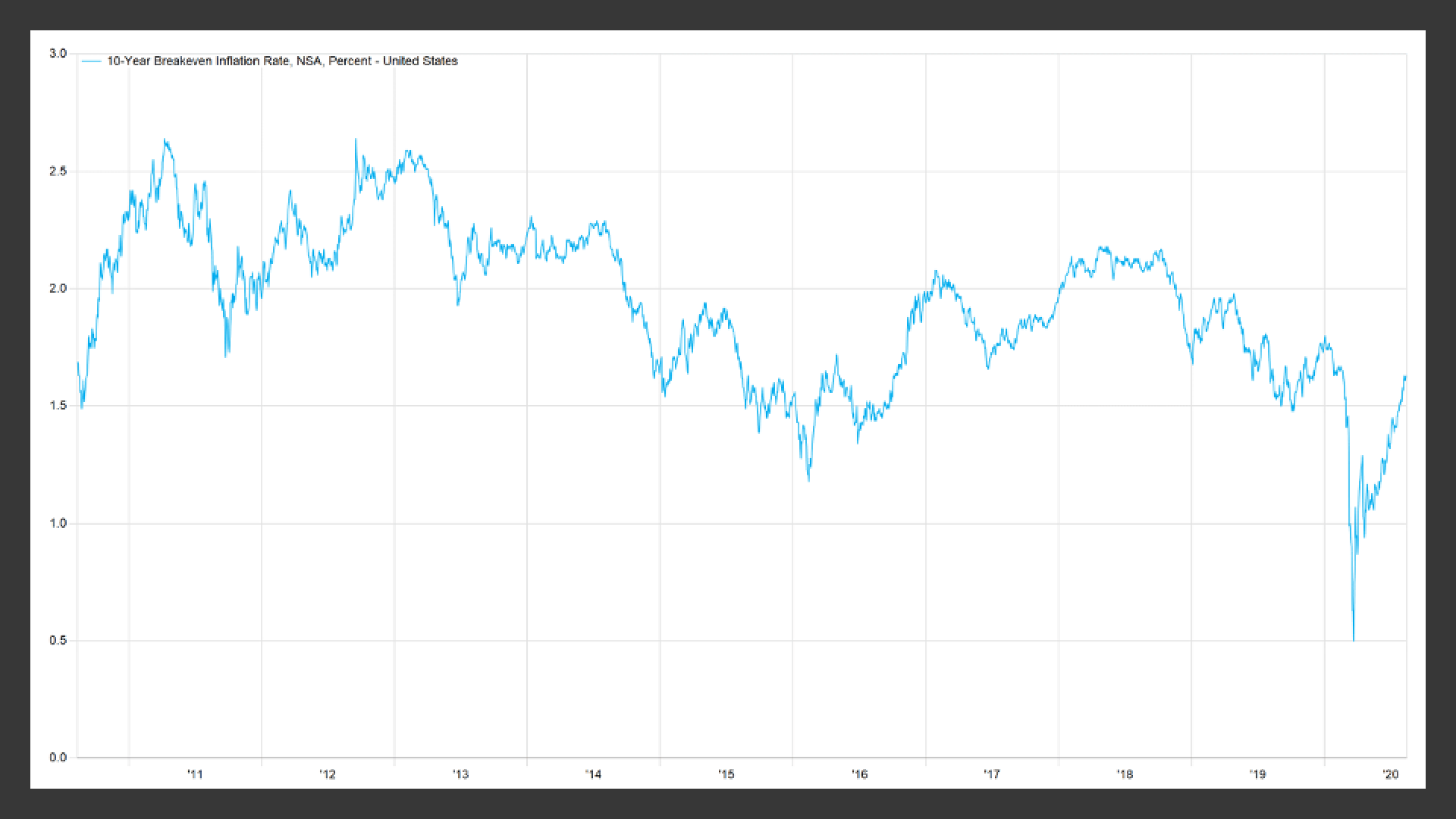 Following the dramatic pandemic-induced collapse during the middle of March, inflation expectations have been quietly, and rapidly, rising. Whilst they remain at ‘comfortable’ levels as we stand here today, the biggest central bank liquidity bazooka in history comes at a time when hard dollar capital expenditure spending in the global commodity production ecosystem has collapsed by an estimated 25-35% over the past six years1. Add to this already potent mix a significant disruption in global supply chains caused by the Covid-19 pandemic, and exacerbated by geopolitical fracas, and the prospect of an upside inflation surprise down the road seems altogether less remote. Whilst we sympathise with the consensus view of positioning for a deflationary outcome, in our minds even the slightest change in expectations at the margin will lead to meaningful outperformance from commodity sensitive risk assets.

Finally, on a related note, according to a recent Financial Times article, more than 60% of the $60 trillion global bond market tracked by ICE Data Services currently trades with yields of less than 1% (see chart below), whilst global negative yielding debt has soared to almost $15 trillion: 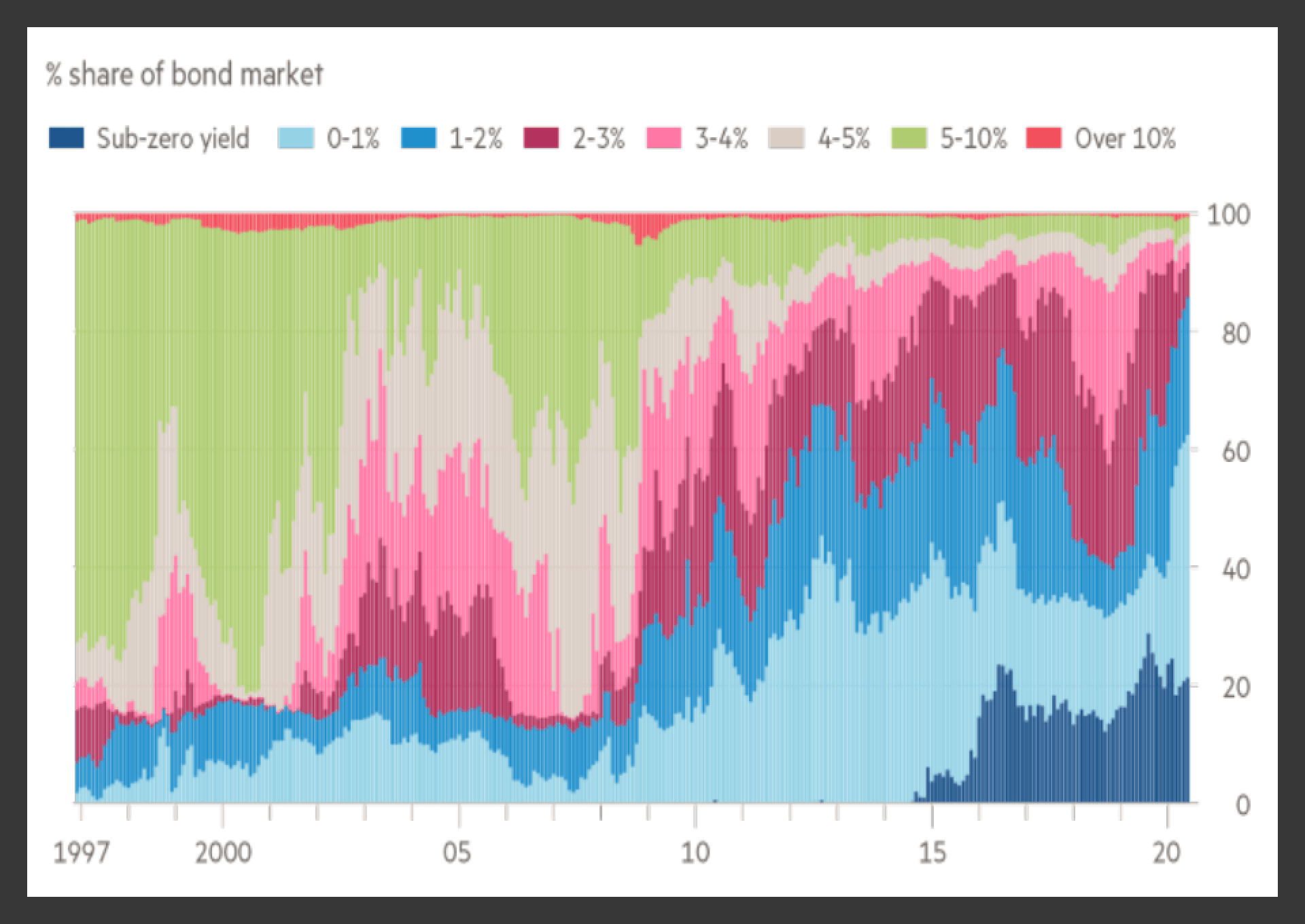 Should concerns about inflation manifest in a meaningful way, a colossal amount of money would need to find an effective hedge in short order. Were a small drop of the fixed income ocean to find its way into the commodity universe, the buying pressure on gold, silver and other precious metals would be enormous.

Turning to portfolio positioning, TEAM Asset Management’s investment framework affords us the scope and flexibility to make relevant and meaningful asset allocation decisions. We hold a structural fixed weighting in gold and precious metals across our 3 core multi-asset strategies of over 13% (broadly represented by 6% in gold bullion, 4% in gold mining stocks and 3% in physical silver).

In the equity space, we have exposure to several senior, gold producing mining companies. Given the increasingly attractive economics developing in the sector, we feel that in terms of our global mandate, mining stocks are in an extremely attractive position over the coming years. Factors we consider include, but are not limited to, management calibre in terms of strategy execution, asset reserve quality and cost control, valuation relative to sector and history and significant and visible cash flow generation.

Taken in aggregate, our long-term strategic view suggests a potent mix for gold and the precious metals universe to continue its ascent higher. With that said, we do not expect the journey to be a straight line. Acknowledging that the high level of fragility inherent in the current financial market backdrop will lead to bouts of volatility and dislocation, we continue to view short-term setbacks (including the current share price correction) as opportunities to add to our exposure.