I started in Investment Management in 1978 – the UK Prime Minister was James Callaghan, the US President was Jimmy Carter. The Football League Champions were Nottingham Forest, and the FTSE100 Index was 468.06. The biggest selling album was, ironically, “Saturday Night Fever”.

I’ve worked through crashes, bull market peaks, and bubbles. I’ve worked on the Stock Exchange Floor, in the Futures market, and run large investment departments. In addition, I’ve been a Director of a large retail organisation and a significant hedge fund, amongst others – as well as a political career.

My overriding advice is that this storm will pass – stay safe and keep calm.

It is now very likely that the world will experience a global recession, so its perhaps a good time to put this into perspective. What’s the difference between recession and depression? The comedic answer is that a recession is when your neighbour losses his job, a depression is when you lose your job. The following statement is not particularly obvious, but many people actually enjoyed the Great Depression of the 1930s. If you had a job the money continued to flow in and keeping up with the neighbours had never been easier - because the neighbours were in reverse. Often in life it is better to be a spectator than a participant.

The pandemic will have far reaching implications for society, some of which will take many by surprise. After the containment of the virus many will go back about their business in the assumption that things will be the same as before. But they won't.

Think about it - the prosperity of the past fifty years has been built up under the model of american consumer capitalism - buoyed not only from fall of communism and the hundreds of millions of new consumers to market to, but also the rise of credit enabling us to borrow from future generations, and technological advances - especially in terms of supply. Countries have spent and borrowed their way to prosperity. A consumer economy is at odds with climate change and environmental considerations. ESG (environmental responsibility) is often just a marketing fraud which allows corporations to carry on as before selling without cultural change. A genuine ESG company would not feel the need to advertise this fact as it would be an intricate part of its DNA rather than a marketing tool.

Whilst every civilisation does eventually come to an end, I am not advocating this. What I am saying is that there will be fundamental social change and far more unrest amongst a population forced to adjust. Millennials who say they are environmentalists but often fail to live to their beliefs, may well be forced to adjust. Flights will no longer be as cheap, the number of 'unsafe' destinations will increase through social unrest. Interest rates will go negative, savings rates will be derisory, and pension fund deficits will widen. One the plus side adversity often brings communities together.

So, what should we invest in? We would expect yield on equities to rise, as interest rates fall. This may be counter-intuitive but the greater yield on equities will be required to compensate investors for their riskiness relative to Government Bonds. There are some very strong companies that have highly attractive dividend yields. Whilst the share prices of these companies have fallen sharply during the recent rout, their ability to pay dividends should continue over the long term. With the benefits of compounding this will produce a significant income return. We will be looking at large global companies who will use their financial strength to take advantage of market opportunities. There will be both creative destruction and Darwinism in the form of survival of the fittest.

Similarly, the yields available in the corporate bond market are attractive. These bonds produce an income well above inflation with the benefit of a fixed maturity date. Over the short term the capital value of the portfolio will look very depressing, but on the plus side income shall continue to be generated. Alternatives such as cash and/or Government Bonds offer negligible income returns.

The major problem is that markets are far more inefficient than they were when I started in the industry 42 years ago. The regulators have destroyed the market makers ability to support liquid markets and in extreme circumstances prices are determined by supply and demand without any reference to valuation or other investment considerations.

In these circumstances the income yield becomes important as not only does this provide positive cash flow, but also provides an anchor for valuations when sanity comes back. Income should remain fairly constant regardless.

The following is a certainty. When you receive your valuation, you will be disappointed with the performance in real terms as there has been no hiding place. Relative to the index the performance should be good. If you hold bonds, they should still redeem at 100 on the maturity date, and still pay the interest until they mature. A valuation is just a photograph of the value of the assets at any point in time. Losses are only incurred when realised.

As I write (close of business 18th March 2020) the year to date performance of markets is as follows: 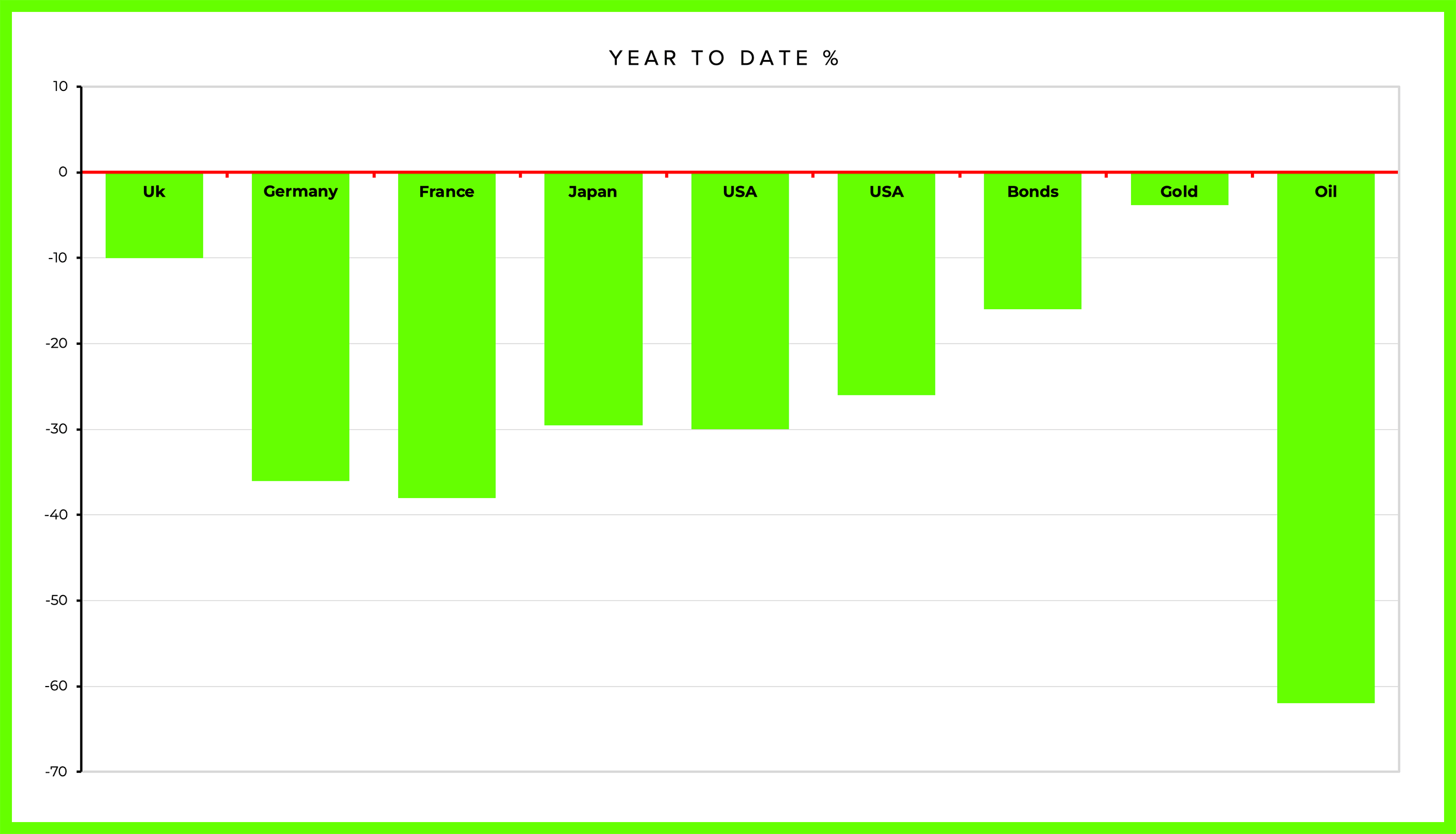 It is always darkest before dawn. Just as it did after all previous disasters the world economy will recover, and Governments and Central Banks will do everything in their power to restore normality.

The number one priority is keeping yourself and your family healthy and free from harm. Your portfolio, with our input, will look after itself – stay safe and look after yourself.